On October 4, Solar Energy International (SEI) was represented at the grand opening of the largest solar array in Upstate South Carolina. The 1 MW solar array, which went live earlier this year, was launched by Glen Raven Fabrics LLC, in partnership with Hannah Solar, a full-service solar integrator based in Atlanta, Georgia, with offices in South Carolina.

The install, which is located on the company’s Anderson campus, is the most recent of two large scale solar installs, according to an article from the Greenville Business Magazine, putting Glen Raven Fabrics LLC on the forefront of the movement toward renewables in the textile industry.

Raven’s president and CEO, Lieb Oehmig told Greenville Business Magazine, “We have culturally always had a great interest and responsibility to make sure we are looking at environmentally sound and sustainable practices,” Oehmig said. He added that this $2 million system will pay for itself in energy savings in just four years, and there is also potential to add on to the system in the neighboring property, also owned by the company.

“The installation was inspiring and indicative of the growth and excitement about solar technology in the SouthEast region,” Breccia said.  “SEI connected with professor Robert Charest of Elon University who also had a demonstration table, members of the Anderson County Economic Development Offices who were interested in bringing more solar training to the region, and Hannah Solar.”

Pictured in this article is the ELF Solar-Powered Electric Vehicle, one of the first mass-marketed exclusively solar vehicles. According to Breccia, SEI had the chance to reconnect with old friends and SEI Alumni Jack Martin, professor at Appalachian State, and Derek Robinson of Glen Raven, who were demonstrating the ELF Solar-Powered Electric Vehicle and several solar bicycles for attendees.

“It was amazing representing SEI at such a historic and inspiring event,” Breccia said. “As both a local to this region and a member of the solar industry, it’s great to see local and regional businesses setting an example and moving to adopt more sustainable practices like solar, as well as the support and representation from Duke Energy.” 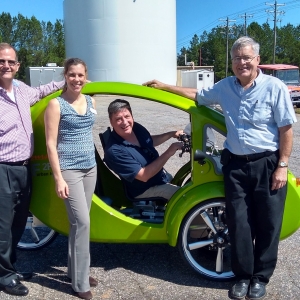